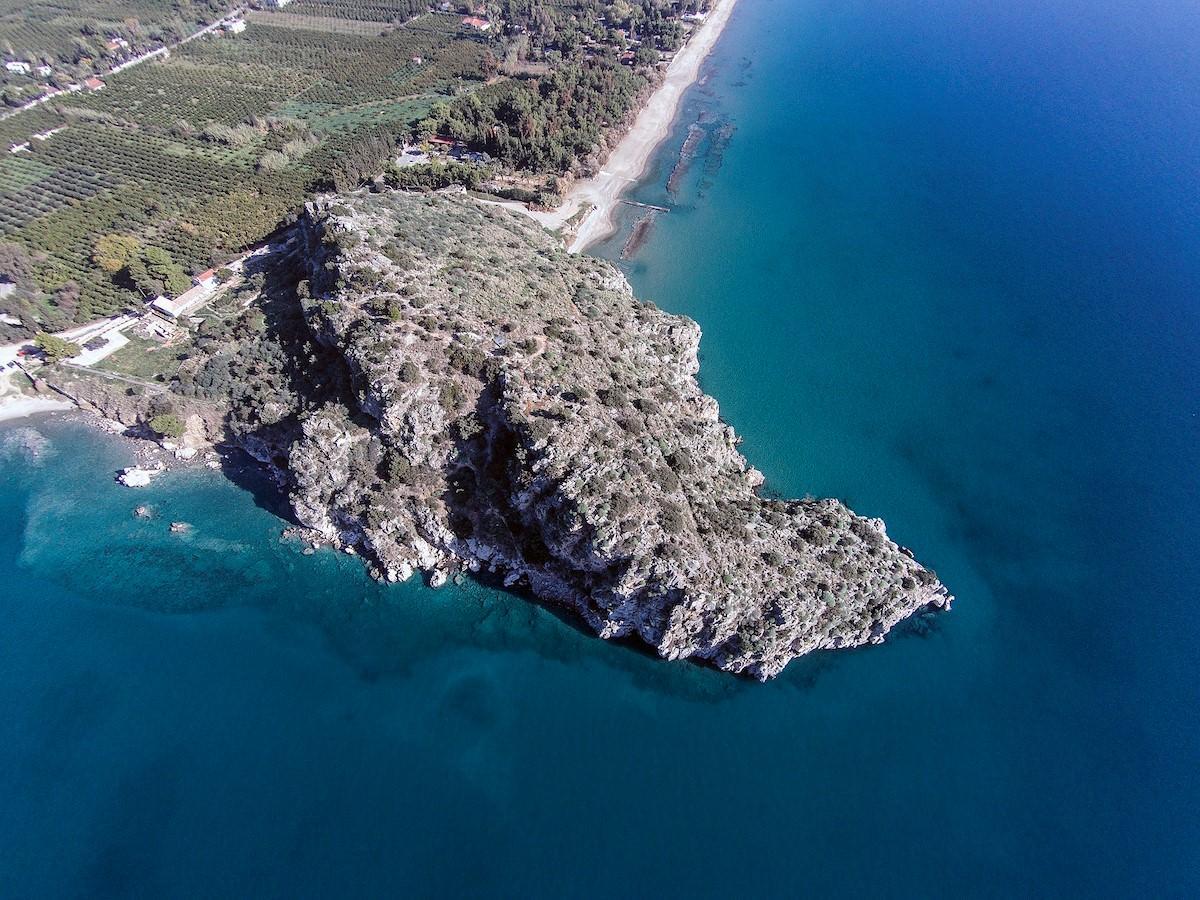 The Kastraki peninsula juts out between Gulf of Tolo and Plaka Beach at Derpano. The steep 350m long and 140m wide rock is washed on the one side by the waters of the Argolic Gulf, and gently slopes down to join the mainland to the north west. It is here where the 'Lower City' was excavated, in which dense layers of habitation from various periods were uncovered. Remains of a domestic, ritual and funereal nature have been excavated at the top of the hill (the acropolis), as well at surrounding sites on the level land to the east and on Barbouna Hill, which is opposite and to the northwest.

The area was already inhabited by the time of the Proto-Helladic period in the 3rd millennium BC. The settlements of the Meso-Helladic, the Mycenaean and the Geometric periods, which followed that of the Proto-Helladic, are also important. In around 700 BC, Asini was attacked by neighbouring Argos, which led the residents to flee and settle in the area of modern Koroni. From then, Asini went into decline, only to flourish again at the end of the 4th century BC. It was at that time that the impressive walls that surround the hill were built — the work, many claim, of Dimitrios Poliorketes. The advantages of its position, its natural defences, its vicinity to the sea and the fact that it was sheltered from the wind would motivate settlement on the hill during the Late Christian period, as well. The city walls were re-enforced and repaired every time that its temporary owners — those who wished to take the Aegean — decided it was necessary. A recent example was the Italian troops based on the hill during WWII. During the Italian occupation, there was intense building of defences which destroyed the ancient remains that Swedish archaeologists had uncovered in the 1920s.

On entering the archaeological site through the main gate in the walls, you can see the whole history of the area, from the dimmest past to more modern times. Although a part of the archaeological remains has not survived due to the Italians and the wear and tear of time, the visitor can still see buildings and constructions which date from the Meso-Helladic period to WWII, such as Meso-Helladic 'House B', the Roman baths, the three-chambered underground cistern, the presses, the wells, the towers of the Hellenistic fortifications, and the Italian gun positions and lookout posts.

The work on laying out the archaeological site 'Asini-Acropolis of ancient Asini, remodelling of the archaeological site at Kastraki' was funded by the OP 'West Greece - Peloponnese - Ionian Islands 2007-2013' and was completed in 2015. At part of this project the ancient gate was re-constructed, stairs and pathways for visitors were either constructed or repaired, metal steps and footbridges were placed in areas on the route that were difficult to access, the remains of the monument were displayed and reconstructed, informative signposts were placed around the site, rest stops with seats were created, roofs were placed over mouths of wells and cisterns and 3 later buildings were re-constructed and put into new use. One was used for the new ticket office/museum shop for the archaeological site, one for an exhibition on the history and methodology of the excavation process and the third a multi-media room, where there are digital tour applications (digital map, timeline, a visual history of the area, a three dimensional depiction of the baths and 2 short videos on the subject of the Italians in Asini and on the Swedish excavations). An addition to the exhibition areas is an exhibition which gives an overview of the Italian-German occupation of Agolis and is being created inside a manmade cave at the foot of the rock of the acropolis.