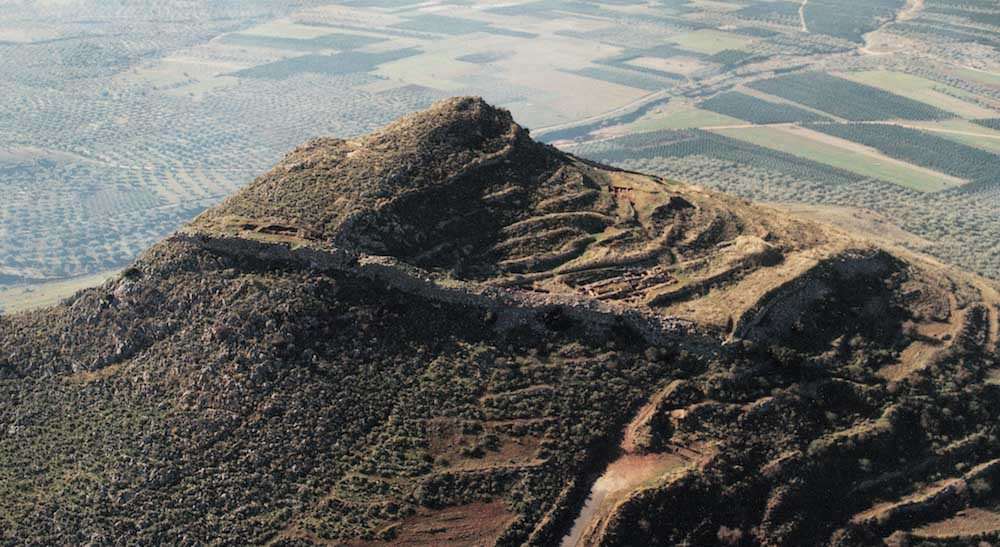 The acropolis of Midea was, together with Mycenae and Tiryns, one of the three main Mycenaean centres in Argolis. Its importance is demonstrated by its impressive cyclopean defences, its place in mythology, the rich necropolis in neighbouring Dendra and the finds from excavations of the site, which began in 1939 and, after a long break, have been going on systematically for the last twenty years.

The hill where the acropolis was founded dominates the eastern edge of the Argolid Plane and is about half way between Mycenae and Tiryns. At a height of 270m above sea level, it is the highest Mycenaean acropolis. The cyclopean wall is built with large blocks of stone and is 450m long, between 5 and 7m wide, and at certain points it has survived up to 7m in height. The total fortified area, which consists of the upper and lower acropolis, is 24 stremmata [1 stremma=1,000m2].

Midea Hill was occupied from the Neolithic until the Byzantine period. During the Meso-Helladic and early Mycenaean period (18th-16th century BC), Midea was already a significant settlement, which developed into a large and important Mycenaean centre. Its heyday is placed in the 13th century, which is when the cyclopean wall was built. It is to this period that the majority and best preserved constructions discovered within the acropolis belong. Midea, just like Tiryns, was hit by a powerful earthquake at the end of the 13th century BC, which resulted in the widespread destruction of its defences and buildings. In the ruins of one of the buildings, a crushed human skeleton was found, no doubt a victim of the earthquake.

The excavations brought to light two monumental entrances into the acropolis: the East and West Gates. Various building complexes have been discovered near to the gates, as well as on the terraces to the northeast and the southwest, which had many rooms, and some of which were storage and workshops. The remains of a sewage system have also been located. The fragments of murals that have been found suggest that many of the rooms must have been painted. Many finds have come from these areas, such as clay and stone pots; stone storage 'stirrup' jars. some with inscriptions in Linear B; lead utensils; handmade or wheel-thrown clay idols; stone seals and various stone and copper tools. Standing out among the finds are the many unworked pieces of precious stone and a steatite mould for making beads out of gold and glass, which show that there must have been workshops producing jewellery on Midea.