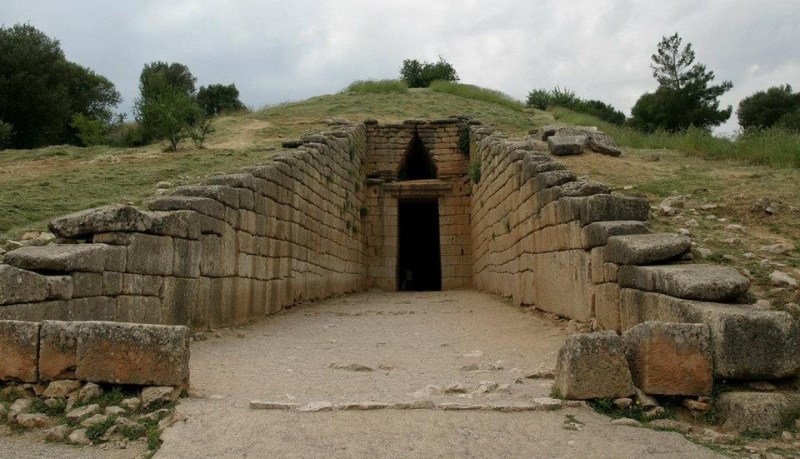 Mycenae 'Rich in Gold', the kingdom of mythical Agamemnon, first sung by Homer in his epics, is the most important and richest palatial centre of the Late Bronze Age in Greece. Its name was given to one of the greatest civilizations of Greek prehistory, the Mycenaean civilization, while the myths related to its history have inspired poets and writers over many centuries, from the Homeric epics and the great tragedies of the Classical period to contemporary literary and artistic creation. Perseus, is traditionally considered as its mythical founder. Pausanias reports that Perseus named the new city Mycenae after the pommel (mykes) of his sword, which fell there, or after the Perseia spring, discovered there under the root of a mushroom.

Mycenae was founded between two tall conical hills, Profitis Ilias (805 m.) and Sara (660 m.), on a low plateau dominating the Argive plain and controlling both the land and sea routes. Grave Circle B, a stone-built funerary enclosure containing monumental graves with rich grave gifts, indicates that the first families of rulers and aristocrats appeared at Mycenae at approximately 1700 BC. This social structure developed further in the early Mycenaean period, c. 1600 BC, when a large central building, a second funerary enclosure (Grave Circle A) and the first tholos tombs were erected on the hill. The finds from these monuments show that the powerful Mycenaean rulers participated in a complex network of commercial exchange with other parts of the Mediterranean.

The construction of the palace and fortification wall currently visible began c. 1350 BC . A new wall was erected to the west and south of the early one approximately one hundred years later , together with the Lion Gate, the citadel's monumental entrance, and its bastion. Included in the newly fortified area were the city's religious centre and Grave Circle A, which was refurbished and used for ancestral cults. The famous tholos tomb known as the 'Treasure of Atreus', with its gigantic lintels and tall beehive vault, was probably built during the same period. At approximately 1200 BC, following a large destruction probably caused by an earthquake, the walls were extended to the northeast so as to include the subterranean well. Successive destructions and fires led to the site's final abandonment c. 1100 BC.

After the collapse of the palatial system the hill was sparsely inhabited until the Classical period. Meanwhile, several local cults of heroes developed in the area, fuelled by Mycenae's fame, which the Homeric poems spread throughout Greece. A temple dedicated to Hera or Athena was erected on the top of the hill in the Archaic period. In 468 BC, after the Persian Wars, in which Mycenae took part, the town was conquered by Argos and had part of its fortification wall destroyed. In the Hellenistic period, the Argives founded a 'village' on the hill, repaired the prehistoric walls and the Archaic temple, and erected a small theatre over the dromos of the tholos tomb of Clytemnestra. The town was abandoned in subsequent centuries and was already in ruins when Pausanias visited it in the second century AD.

In the eighteenth and nineteenth centuries, the impressive Cyclopean walls of the Mycenaean acropolis attracted many travelers and antiquaries who did not hesitate to loot the site, taking advantage of the indifference and greed of the Turkish authorities. Heinrich Schliemann began excavating Grave Circle A, where he uncovered five graves.

The archaeological site of Mycenae comprises the fortified acropolis and surrounding funerary and habitation sites, which are located mainly to its west and southwest. Most of the visible monuments date to the centre's great floret, from 1350 to 1200 BC.

Great Cyclopean walls surround the almost triangular acropolis, which is accessed from the northwest through the famous Lion Gate, the symbol of the Mycenaean rulers' power. The gate was named after the two opposing lions carved in relief and set into the relieving triangle, a typical feature of Mycenaean architecture, over the door. To the right of the Lion Gate are the remains of a building dubbed the 'Granary', because its basement contained carbonized grain. South of the Granary is Grave Circle A, whose six large shaft graves contained numerous gold objects and other works of art. Beyond this is a series of buildings, possibly the residences of high officials The citadel's religious centre, along the south fortification wall, includes the Temple of the Idols, the House of the Frescoes, Tsountas's House and the Priest's House.

The palace, symbol of the power of Mycenaean rulers, dominates the citadel's highest point. It sprawls over artificial terraces and was reached by a large ramp beginning at the Lion Gate. The main palace building includes a large courtyard, a guesthouse and, at its very centre, the Mycenaean megaron.The palace also included workshops and storerooms, both related to the palatial monopoly of goods, cult buildings and houses, which probably belonged to high officials.

At the northeast corner of the fortification a corbelled corridor leads to the underground cistern located eighteen meters below, outside the fortification walls. Near the entrance to the cistern, to its west, is the citadel's second gate, the so-called North Gate, of similar construction as the Lion Gate, only smaller.

Outside the fortification walls, west of the Lion Gate, is Grave Circle B, which encloses fourteen shaft-graves. Four of the nine tholos tombs discovered so far at Mycenae are also located in this area. The so-called tombs of the Lions, Aegisthus and Clytaemnestra, and the Treasury of Atreus, further south, illustrate the development of this type of funerary structure, the latter being its most perfect example, with its enormous lintels, imposing vault and richly decorated facade.