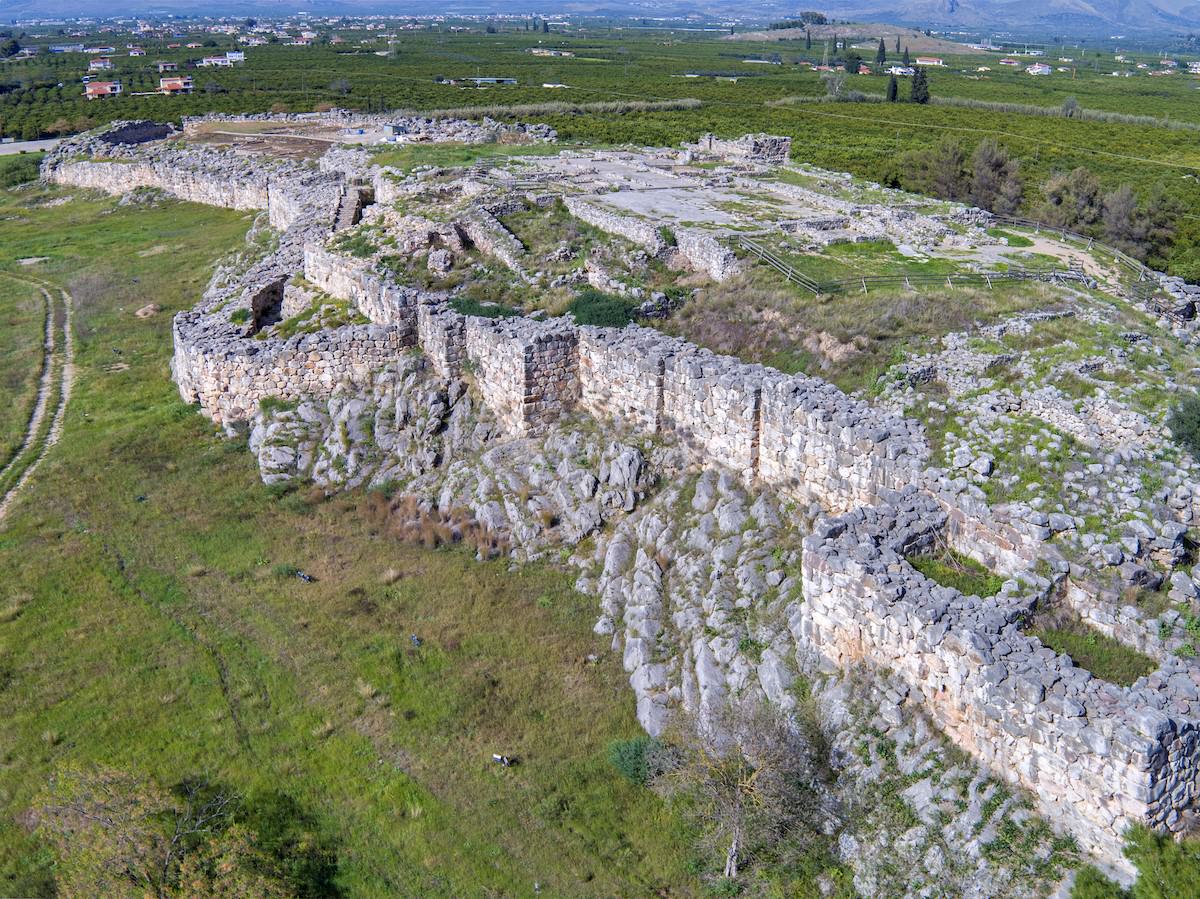 Prehistoric town of Argolis, located in a valley between the hill in Nauplion and Mycenae. According to tradition, the city took its name from the hero named Tirynthos, son of Argos, grandson of Zeus, but was founded by Proetus, brother of the king of Argos Acrisius, who fortified Tiryns calling for this purpose, as Strabo refers, the seven Cyclops from Lycia. That's why Pindar calls the walls of the city "Cyclopean vestibules".

When Proetus died, his son Megapenthis became the king of Tiryns, Perseus followed after, and Electryon the son of Perseus next. Electryon had a son named Likymnios, who was killed in Tiryns by Tlepolemos, son of Heracles. Alcmene, Elektryons' daughter, married to Amphitryon, who would be the successor of his father-in-law in the throne, but he was banished by the king of Argos Sthenelaus. The son of Alcmene and Amphitryon, Hercules, reoccupied Tiryns and lived there for many years, so he was called and "Tirynthian Hercules" also. However, despite the close relationship that existed between Tiryns and Heraclides, the city remained in the hands of the original population of the Achaeans and in the period after the Heraclids invasion and the conquest of Peloponnesus by the Dorians. For this reason there was hostility against Argos and Tiryns in historic times. The strong walls of Tiryns were still visible and provoked the attention of Pausanias in the 2nd century BC.

The Mycenaean citadel at Tiryns is conspicuous for its mighty Cyclopean walls that led Homer to call it 'well-walled' in the Iliad. Indeed the Cyclops, according to Greek myth, built these fortifications for Proitos, king of Argos, who had the giants brought from Lycia in Asia Minor. The strong walls of Tiryns were very dangerous for the Doric colony of Argos. When Kleomenis defeated the Argives, their slaves occupied Tiryns for many years, as Herodotus refers (Book 6, 83). Herodotus also mentions (Book 9, 28) that Tiryns with 400 hoplites took part in the battle of Plataea in 480 BC. Later, Tiryns was conquered by Argos, so the lower city was destroyed completely, the surrounded acropolis dissolved and the residents left, others in Epidaurus and others in the coastal city of Ermionid. Those who didn't leave the city were transferred to Argos. All these should have happened around 468 BC. Since then Tiryns remained uninhabited.

The citadel which covers an area of approximately 20,000 sq. m., is built on a low rocky knoll, which rises barely eighteen metres above the Argive plain, and in the Mycenaean period was near the sea. Heinrich Schliemann, the excavator of Mycenae, and his colleague, the architect Wilhelm Dorpfeld, excavated the acropolis in 1885 and 1886. Heinrich Schliemann, stressed the similarity of the throne room with that of Odysseus mansion described by Homer. Today, the Tiryns excavations continue under the direction of the German Archaeological Institute. According to the excavations that have been made, the hill of Tiryns must have been inhabited by the Early Helladic period at the 3rd millennium BC. At the top of the hill was built the palace of the king, a circular building that had a diameter of 28 m. At 2nd millennium BC the so-called Middle Helladic civilization was initiated by people who used wheel-maded brown-coloured pots (Minyan vases) and perhaps speaking a primary form of the Greek language. There is no indication in Tiryns about disasters and fires which put at an end to a various Early Helladic cities around Corinth. Thus, the Early Helladic period inhabitants of Tiryns seems that they accepted friendly the newcomers and the town became peacefully a center of the Mycenaean civilization.

The Tiryns citadel is the second most important prehistoric Argive acropolis after Mycenae. It was inhabited in the Neolithic period and had important settlements in the Early Helladic (3rd millennium BC), Middle Helladic (2000-1600 BC) and Early Mycenaean (16th-15th centuries BC) periods. The sturdy walls date to the 14th cent. BC for the Upper citadel and to the 13th cent. BC for the Middle citadel. Fortification work was completed at the end of the 13th cent. BC with the construction of the walls of the Lower citadel. The first walls were built perhaps at the 16th century BC on the south side of the citadel, with a strong gate that directly opened into the courtyard of an older palace. After 1400 BC, when the empire of Mycenae reached its peak, the fortified area of Tiryns was doubled, the whole hill was fortified with huge walls, with underground tunnels and corridors, and within that area was built and fortified the last (about 1200 BC) Mycenaean palace. The walls were built in the Cyclopean or Pelasgian way, with not symmetrical boulders for example. The gaps between the boulders were filled with small rocks and clay. The walls were thick of about 8-10 m and a height of 10 m, while the highest saved up to 7.50 m. The entrance of the citadel was a large gate on the east side of the wall, which leaded there by an uphill road starting from the plain.