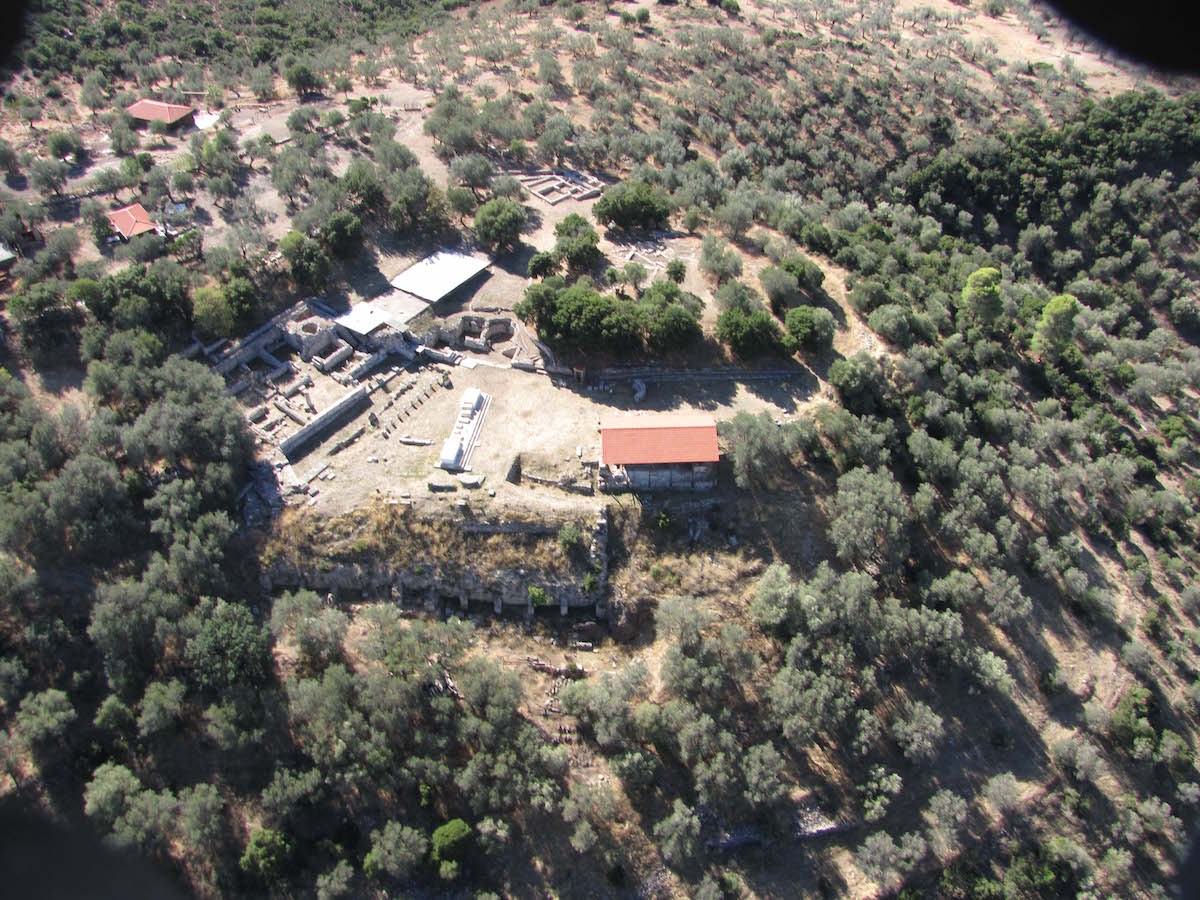 The Sanctuary of Apollo Maleatas occupies the north slope of the most easterly peak of Mt Kynortion. The cult was born in very ancient in very ancient times beside the springs with their abundant water, and it later continued and flourished in the Asklepieion in the valley that extends beneath the western foothills of the mountain, where the Theatre has been constructed.

The first human habitation in the place is evidenced by the remains of an Early Helladic settlement (3rd millennium BC) that was brought to light on a mound on the top of the peak. Life in the settlement continued during the Middle Helladic and Mycenaean periods. An open-air altar of ash was then constructed north of the mound on a stone-built terrace with rich votive offerings, and also a large terrace where ceremonial dinners were given in the course of the sacrifices.

On a smaller terrace, at the place where later the Archaic and subsequently the Classical temple of the god was built, small sacred structures were uncovered in which the sacred utensils were kept.

In the Prehistoric period the cult may have been dedicated to a deity of nature with a chthonian character. The adjacency of the site of the Sanctuary to the abundant springs that also fed the Asklepieion through sunken cuttings and surface conduits supports this hypothesis.

In historical times, from the 8th century BC onwards, the cult continued in honour of the god Apollo, as a doctor and the father of Asklepios in the myth. Votive offerings were placed on the open-air altar of ash until the 4th century BC.

During the 6th century BC an Archaic temple was built for Apollo on the Mycenaean ruins, and on top of this was erected a Classical hexasyle, prostyle temple, with an adylton, built of limestone and marble, in 380 BC. The continuity of the cult is apparent to the visitor on this terrace.

In the 4th century BC the monumental altar of the god was built 17 m away on the line of the temple; It belongs to a rare category of monumental terrastyle covered altars. It was destroyed in the 1st BC together with the temple. It had the shape of a large offering table with marble facing on a stepped base and was protected by a light roof supported on four posts above its main part.

Northwards, where the terrain drops away, the Sanctuary of Apollo was bounded by a strong limestone retaining wall, on which stood a colonnade that faced inwards. It was built in the 3rd century BC.

The entrance to the Sanctuary was behind the east end of the colonnade, where the road from the Asklepieion ended after passing below the retaining wall. The Sanctuary was on the left of those approaching it and was bounded by the open-air precinct of the Muses, which dates to the 4th century BC and had the shape of an elongated parallel-sided peribolos with 9 pillars on the front with horizontal wooden balustrades. An altar at its southwest end was dedicated to the Muses.

There were priests’ quarters to the east of the Sanctuary from Hellenistic times, to which the inscriptions also bear witness.

In the time of the Roman domination a propylon was constructed at the NE end of the Sanctuary consisting of three parts: a stone stairway with 9 steps, an outside area (for waiting) and an inside area (reception) with a guardhouse and a fountain for purification incorporated. The doorway of the propylon was closed by a wooden door.