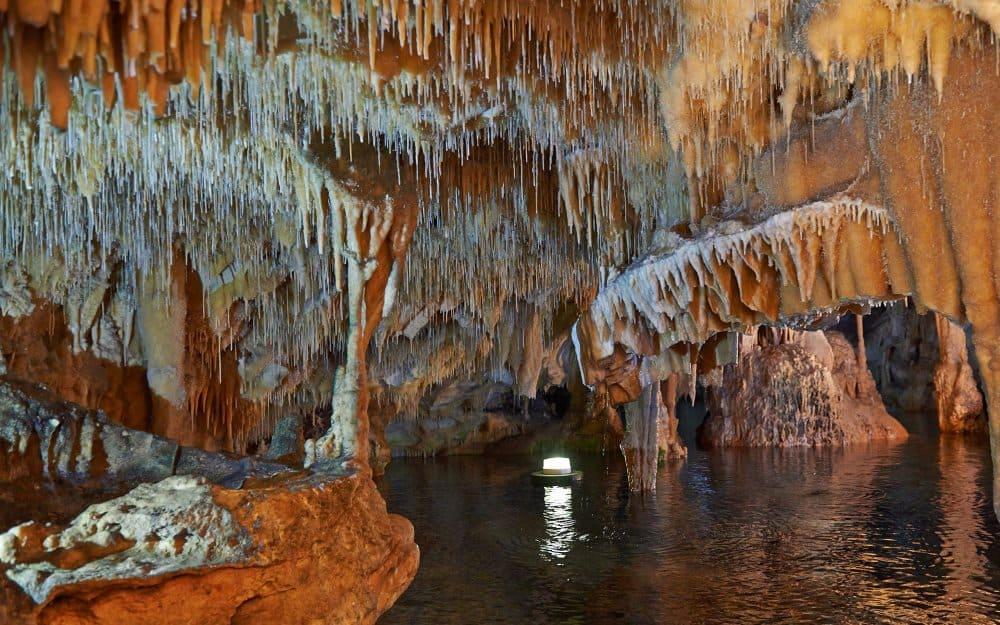 The spectacular cave complex of Diros in the Peloponnese offers visitors the opportunity to travel back to the Neolithic era and even further.

It is not just the drop in temperature that gives you the chills as you descend underground to start the 40-minute boat tour of Vlychada, the biggest cave of the Diros complex. It is the beautiful and dramatic formations of stalactites and stalagmites, formed millions of years ago, when the sea, located just a few meters away, started to rise and formed the lake we see today. It is the excitement of not knowing what can be hiding in the darkness beyond the illuminated 1.5k route, and the realization of the sheer size of this underground miracle of nature: a series of vast caverns stretching 15k into the rock, with 2,800 waterways – and this is only what we know of so far.

The exploration of Vlychada started in 1949 and has yielded fascinating finds, including the fossil of a hippopotamus from the late Pleistocene Epoch, around 32,000 years ago, as well as evidence of panthers, lions, spotted hyenas, ferrets and seals. It is a treasure trove of information relating to the prehistoric fauna that existed in the region we know today as the Peloponnese.

“Finds in Alepotrypa cave suggest that the people who lived here were members of an advanced community.”

Scientists are also busy exploring another cave in the complex, Alepotrypa (Greek for “fox hole”), which, however, is not open to the public. Expectations are running high, especially following the discovery last year – just outside the entrance – of the perfectly preserved remains of a couple, aged 5,800 years old, locked in an embrace. Their grave was part of one of the biggest Neolithic burial sites ever found in Europe. It also contained an ossuary, as well as several ceramic urns and beads, among other offerings, suggesting that the people who lived here were members of an advanced community.