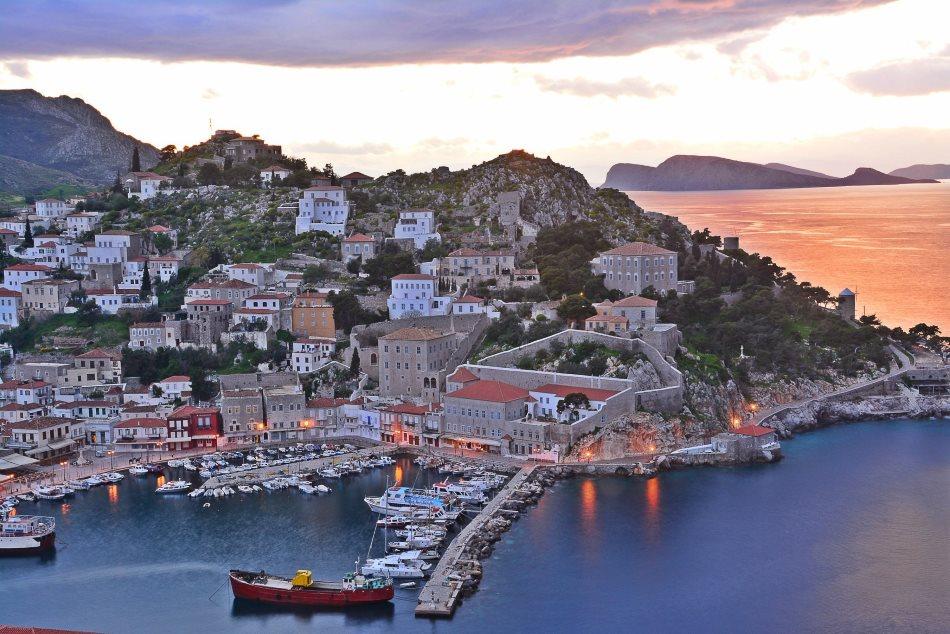 To visit the Greek island of Hydra is to discover a hidden paradise.

Cars and even bicycles are forbidden. Apart from a few utility vehicles, all land transport is undertaken by donkeys, mules, horses, and hand driven carriages.

A journey of less than two hours by hydrofoil from Piraeus harbor does not just take you back in time, it places you outside time altogether!

Alternatively, in less than 3 hours driving from Athens, through Corinth and Epidaurus you come to Metohi in the Peloponnese, which is facing Hydra across the gulf. From there, by sea taxi, or passenger boats that cross the bay every hour, you cross over to Hydra within 15 minutes.

This feeling of timelessness is strengthened by the architecture which is entirely traditional and ranges from huge mansions to simple houses. It is almost impossible for the eye to encounter disharmony on Hydra.

Hydra's glorious history starts in the 18th century. During this period she built ships, produced admirals and captains, became a naval power and played an important part in the War of independence against the Ottoman Empire. Hydra was called Little England at the time. Here was founded the first Merchant Marine Academy in the world, in 1749, still operating today! It is rather impressive that such a tiny island is the birthplace of five Greek Prime ministers and of the first President of the Hellenic Republic.

In the 1930s, foreigners began to discover Hydra. Many of them stayed at the rambling mansion (destroyed by fire in 1960) of the painter Nikos Hadzikyriakos-Gkikas. One such was the American writer, Henry Miller, who has fine passages about Hydra in his The Colossus of Maroussi (1941).

In the 1950s and 60s, foreign writers like the Australian George Johnston, the Swede Axel Jensen and the Canadian Leonard Cohen bought houses here and laid the foundations of a foreign community that still exists today. Practically every celebrity in the world has set foot on Hydra at some time or other. For Hydra that's no big deal. Celebrities and anonymous visitors have equal status here.

It also worth to be mentioned that Hydra became famous all over the world thanks to the film "Boy on a Dolphin," shot on the island in 1957 with Sophia Loren leading the starring role.

Hydra is ideal for every kind of peaceful, leisurely and fun holiday. Whether you are alone, with friends, family, or on a romantic honeymoon trip, whether you can afford to splash out or you are on a budget, Hydra can give you the holiday of a lifetime. This is demonstrated by the number of people who return here year after year.

We urge you to explore the island's beaches and its tasteful nightlife, and be amazed by its magnificent scenery.

Live the summer romance in Hydra and create moments, you will treasure for a lifetime.