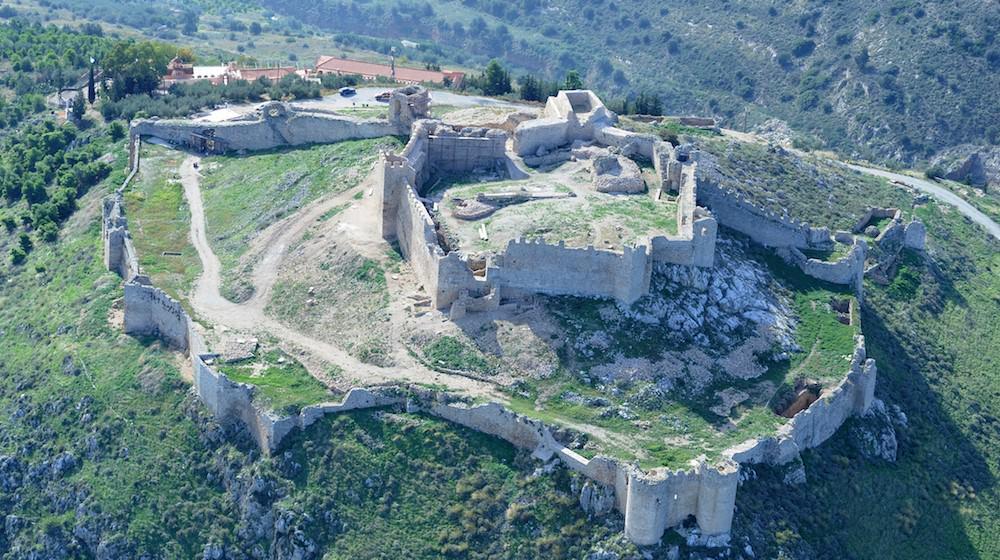 The history of the fortifications on Larissa Hill begins in prehistoric times and reaches the Greek revolution of 1821. Part of the long history of the city of Argos from prehistoric times, it was, from the first, a fortified observation post and the last line of defence for the city. The castle was first mentioned due to it being seized by Leontas Sgouros in 1203. Following his death, it was run by Theodoros Angelos, until 1212, and then it passed into the hands of the dukes of Athens, the de la Roche family, and in 1309 to the house of de Brienne. In 1388, Maria d'Enghien sold Argos and the castle to the Venetians, but before they could take possession, Nero Acciajuoli and the despot Theodoros I took the castle. They eventually surrender it to the Venetians in 1394. In 1397, following a short occupation by the Ottomans, Larissa was destroyed and abandoned. The Venetians returned to the castle but it eventually came under Ottoman rule from 1463 to 1686, when it was re-taken by the Venetians under Morosini. In around 1700, an explosion destroyed the castle's central cylindrical tower, which was used as a powder store, and the bastion that has survived to the present was built in its place. It was conquered by the Ottomans again in 1715. The monument's adventures would continue during the time of the Greek revolution, and battles were fought there. At the beginning of the 20th century, Wilhelm Vollgraff began his excavations, which mostly focused on uncovering the interior.

Traces of the Mycenaean fortifications (13th century BC) have survived in the castle's citadel, and some of the bulky, monolithic architectural elements were reused in later medieval defences.

Although the site was in continuous use from prehistoric times until WWII, it took the form we see today in the Middle Ages. The ancient walls, sections of which can still be seen incorporated into later masonry, were the main guide used when laying out the medieval fortifications. The fort is made up of the citadel at the top and a curtain wall. The walls are re-enforced by towers, which, as a rule, are triangular or quadrilateral. Later, from the 15th century, with the arrival of guns, the castle underwent extensive building work and was re-enforced with cylindrical towers.

The headquarters and military installations were most likely inside the citadel. A first millennium church has been found there. In 1174, a smaller church, dedicated to the Virgin, was built on the same site. The area inside the curtain slowly became residential, but this has yet to be explored. There were large cisterns in both the castle's enclosures. It kept this form until the end of the 14th century, with a few Byzantine and Frankish re-enforcements and alterations, and made Larissa one of the four most powerful castles in the Peloponnese, according to the Chronicle of Morea.

During the 15th century, there was extensive re-enforcement of the fortifications as the result of the castle constantly changing hands between the Venetians and the Ottomans, as well as the developments in defensive architecture brought about by the arrival of guns. Amongst these interventions was the construction of the partition that cut off the south section of the exterior precinct. The external defences were strengthened with large cylindrical towers which had gun loops. The citadel wall was made higher and re-enforced with triangular and quadrilateral towers and one oval one. At the same time, the Byzantine gate was blocked off and another was built a little further to the west. Some point after the mid-15th century, the now-ruined cylindrical central tower was built in the southwest corner of the citadel.