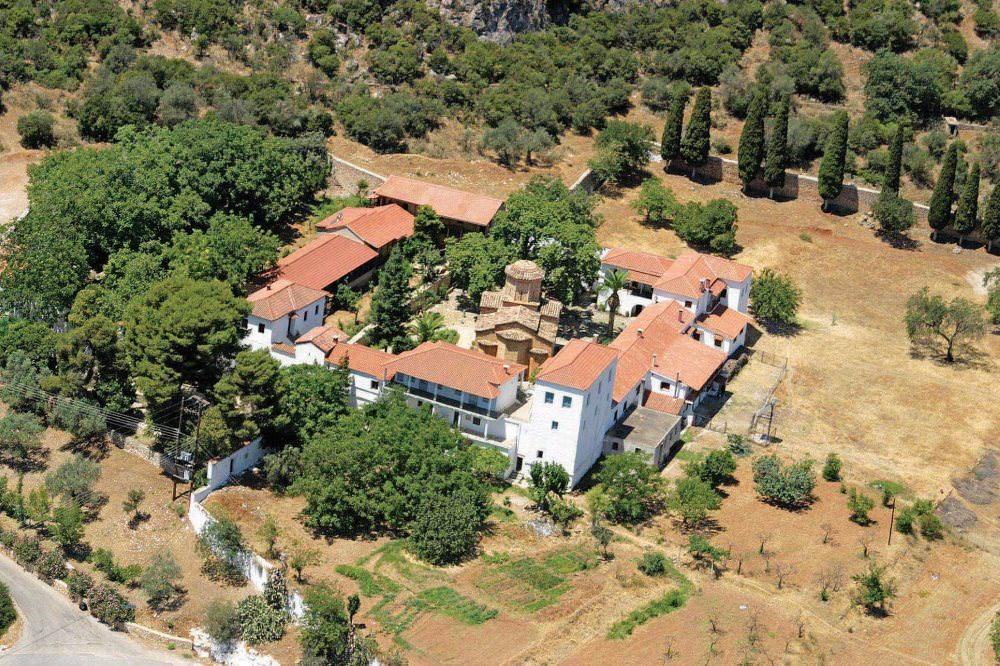 Monastery of the Transfiguration of Christ

At a beautiful location with a panoramic view, scattered with antiquities, at the plain of Thirea, at a small distance from Astros, is the Monastery of the Transfiguration of Christ, which is called Monastery of Loukou. There are a lot of views regarding its name, Γwith most prevalent one the one relating with the Latin word lucus, which means idyllic location, sacred grove.

It is built at the location of ancient Eva, at the ruins of the temple of Polemokrates, which during the Early Christian period has been converted into a church, while next to the monastery there is the mansion of the sophist Herodes Atticus, in the 2nd century AD. The present day catholicon of the monastery, it is later than the Early Christian basilica. It was built in the 12th century, as it is indicated by an engraving of 1117, but also by its masonry. The monastery was a stauropegic one, that is it was directly under the authority of the Ecumenical Patriarchate, according to a sigil by the Patriarch Dionysius II, in the middle of the 16th century. During the period of Venice Occupation and until 1715 it fell into the hands of Roman Catholic Cistercian monks. During the Turkish Occupation, due to its prosperity, it played an important role, supporting the school of the area and the liberating struggle. In 1826, under the threat of the troops of Ibrahim, it was abandoned and was torches by the Turks. Miraculously the catholicon survived and the monastery operated again approximately ten years later. Since 1946 it has been a women’s monastery.

The monastery complex depicts the whole history of the area, since in its precinct there are scattered architectural members, while many are walled-in in the more recent buildings. At the centre of the area is the catholicon, a cross-in-square church with a dome supported in four columns. Externally it has a rich ceramic decoration and Roman sculptures incorporated in its masonry, while marble sculptures decorate the floor. Internally the church is richly decorated with excellent wall paintings. The wall paintings date from 1649 and they are the work of a unknown painter. The wooden-carved screen and the despotic icons, such as the miraculous icon of the Transfiguration date from the middle of the 17th century. Around the catholicon there are two-storied buildings, cells, chapels and the post Byzantine tower, one of the four that were initially here. The monastery’s library is exceptional, and they keep 300 volumes of manuscripts, patriarch sigils, codices, and many relics.

The monastery celebrates on the 6th of August.