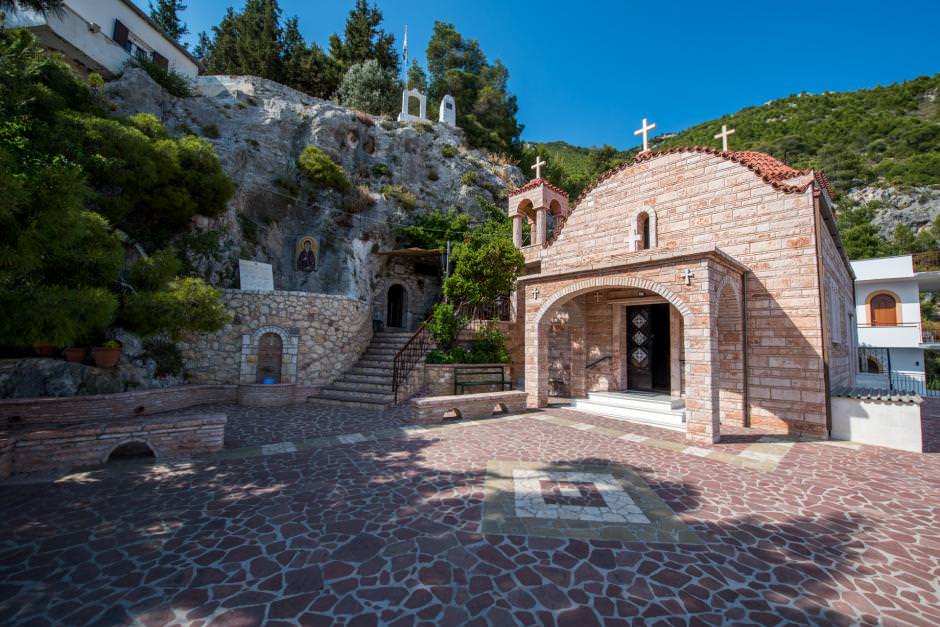 At the steep slope of mount Geraneia, over Loutraki, at a location with a panoramic view, is the famous Monastery of Osios Patapios, one of the most important pilgrimages in Greece.

The monastery has developed around the cave that has been used as a hermitage at least from the 14th century and in its interior the relic of osios Patapios was found. The relic used to be kept at Constantinople and it was under the protection of Helena Palaiologina, later Saint Ypomone (saint patience), and mother of the last Byzantine emperor Constantine Palaiologos. After the fall of Constantinople, was transferred to the cave of Loutraki to protect it and remain intact until its accidental discovery, in 1904. It was placed in a crypt, covered with tiles and was identified by the leather membrane who wrote the name of the osios. The women’s monastery was founded in 1952 and nowadays it has modern, spacious facilities, while it carries out charitable and social work.

Access to the complex takes place through large, winding stairs with approximately 150 steps. The cave is the centre of interest. In its interior there is the relic of Osios Patapios inside a wooden reliquary, while from its roof numerous candles are hanging, dedicated by the faithful. It has stone screen with two gates and is decorated by wall paintings from the Middle Byzantine Period, probably of the 15th century. In front of the cave a modern church has been constructed, dedicated to the Dormition of the Virgin Mary, which is like a catholicon. It belongs to the type of basilica with a dome and in its interior they keep the holy skull of Saint Ypomone. At the area there are still the cemetery with the small church of St Mary of Egypt, a hostel for the visitors, an excellent library and an exhibition area.

The church celebrates on the 8th of December, day of the death of Osios Patapios, and on Easter Thursday, day they found his relic.