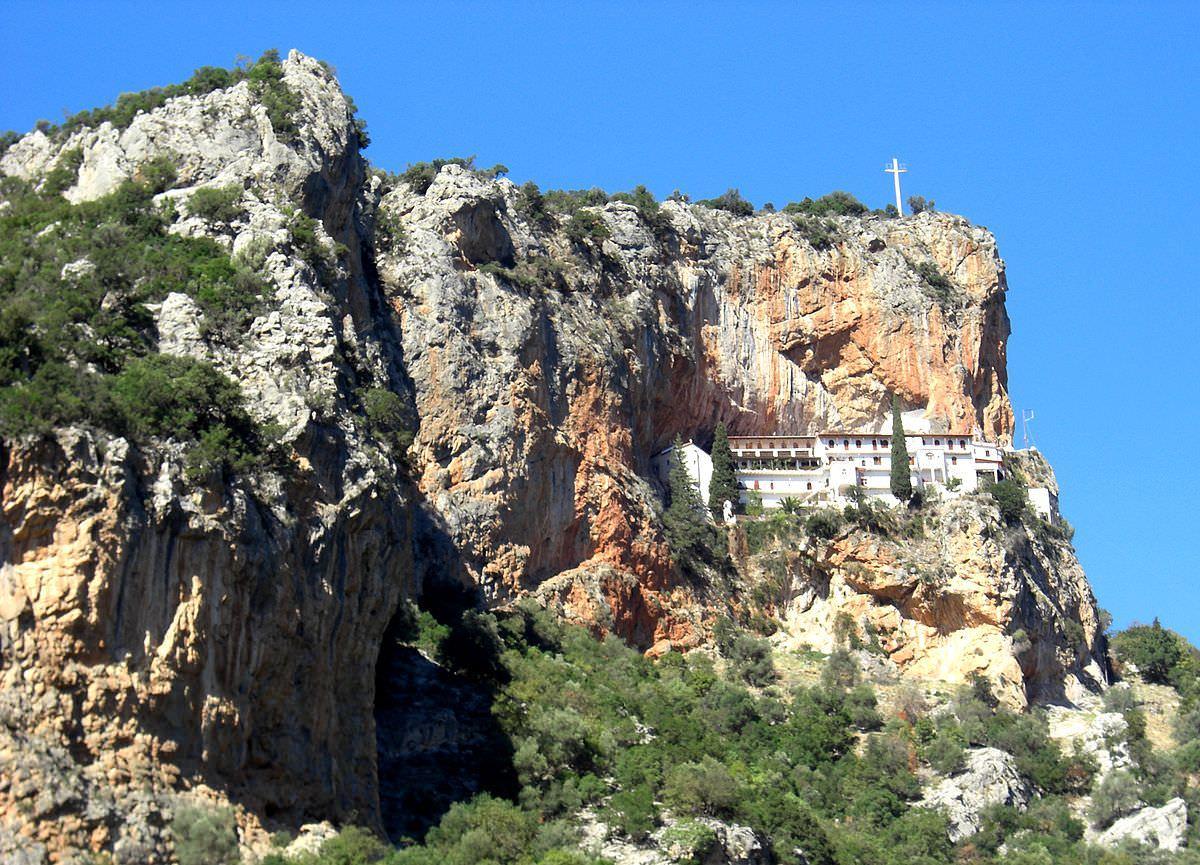 Approximately in the middle of the route from Leonidio to the village of Kosmas, is the monastery of Elona, dedicated to the Dormition of the Virgin Mary. It is constructed on the steep, reddish rock of Parnon, and is one of the most impressive and magnificent monuments of Arcadia. Its name was related to the tradition that people from Elos in Lakonia sought refuge here, bringing with them the miraculous icon of the Hodegetria, which was considered the work of Luke the Evangelist.

Regarding the date for the founding of the monastery, which is honored specially by the people of Cynouria, Lakonia, Spetses and Hydra, there are only folklore tales. According to these, as its first settlers are considered the monks Kallinikos and Dositheos, who were ascetics here in the 15th century. The monks were liked by the Turks, who, when they tried to enter into the church they were blinded by the Virgin Mary, however Virgin Mary healed them after the prayers of the people of the village of Kosmas. What is certain is that in the 17th and the 18th century the monastery operated, as it is shown by its first reference to written sources, which dates from 1730. Then, with a document by the Patriarch Seraphim I its stauropegic privilege, which existed already from 1688, was renewed. During the Turkish Occupation is suffered damages and pillages, but its role in the revolution of 1821 was important, supporting practically and financially the fight. In the year 1836, even though it had been plundered by the troops of Ibrahim ten years ago, it flourished and gradually it regained its former glory. Initially it was a men’s monastery, but since 1971 it has been converted into a women’s monastery.

Nowadays the monastery has renovated cells and auxiliary areas. Access to the complex is through stairs that lead to two successive gates that are protected by murder-holes. Literally on the edge of the rock, an impressive corridor approximately 100 meters long leads to the buildings that are built on various levels and are connected with stairs and corridors. The catholicon, built according to rubble masonry, is a small aisleless basilica, which according to an inscription dates from 1809, while its bell tower was added in 1831. At its interior there are no wall paintings as decoration, but only wooden-carved screen of the 19th century. At the church’s altar area there are showcases with relics, gospels, sacred relics and dedications.

The monastery celebrates on the 23rd of August and the 21st of November.