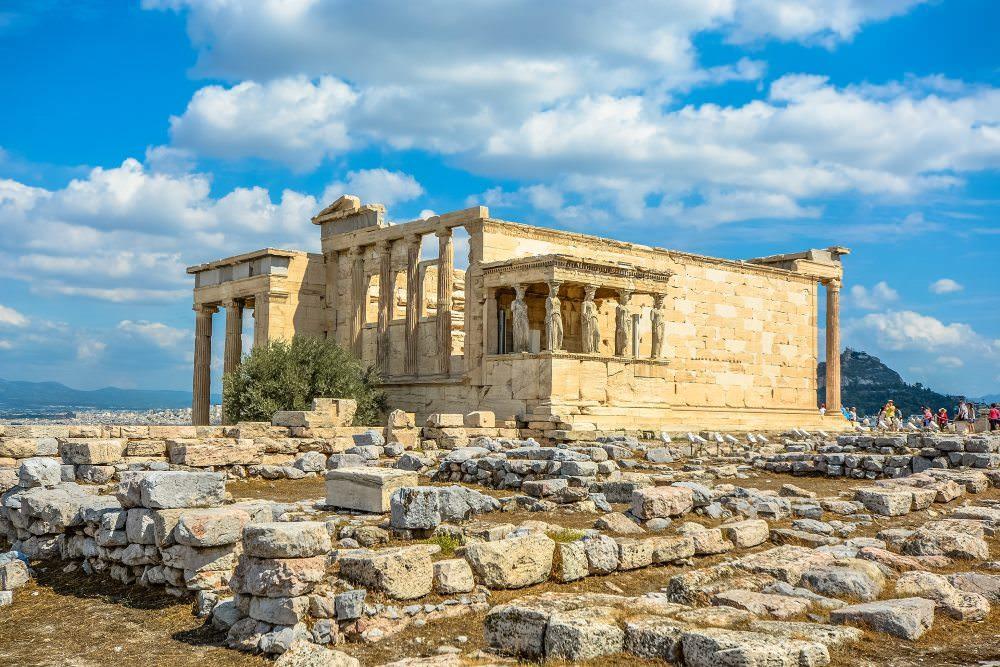 The Acropolis is the one historical site you can't miss. You can take a tour or wander up there yourself but during the summer, whatever you do, unless it is overcast, go early or late in the day. It can get very hot up there and gasping for breath can take way from your ability to marvel at the greatest of all archaeological sites. Getting to the Acropolis is easy and more pleasant than ever because the large avenues which border the south and west of the site (Apostolou Pavlou in Thission and Dionissiou Areopagitou in Makrianni) have been turned into giant pedestrian streets with cafes and restaurants and the walk is quite pleasant. From the Plaka and Monastiraki side it has always been a car-less, enjoyable walk and all you have to do is walk uphill from wherever you are and when you get to the top and there are woods instead of buildings, and steps, take a right.

After climbing the steps you are at the entrance, or the Propylaea, which was completed in 432 just before the outbreak of the Peloponnesian wars. The main architect was Mnesicles, a colleague of Phidias. To your left is the Pinacotheca and a Hellenistic pedestal and on the right the tiny temple to Nike Athena or the Athena of Victory which commemorates the Athenians victory over the Persians. This small temple stands on a platform that overlooks the islands of Saronic Gulf and used to house a statue of Athena. It was dismantled by the Turks in 1686 so they could use the platform for a large cannon. It was rebuilt between 1836 and 1842 and again taken apart and rebuilt in 1936 when it was discovered that the platform was crumbing. If you looking from the propylaea towards Pireaus on a clear day you can see ships waiting outside the port of Pireaus, the islands and the mountains of the Peloponnesos beyond.

The best time to go up there is the late winter or spring when even this stone mountain is not immune to the proliferation of grass and wildflowers which seem to burst from every crack. Even in December, January and February the Acropolis can be surprisingly green. Even having seen a thousand photographs one is still not prepared for the immensity of the Parthenon. The building was designed by the architects Kallikrates and Iktinos as the home of the giant statue of Athena. It took 9 years to build and was completed in 438 BC and is probably the most recognizable structure in the world next to the golden arches of McDonalds. From a temple it became a church, a mosque and finally as a storage facility for Turkish gunpowder. In 1687 the Venetians bombarded it from below. A cannon ball hit the gun powder and blew it up. What makes the Parthenon so fascinating is that to look at it you would think that it is made up of inter-changable pieces. For example the columns are stones placed on top of each other and you could replace one piece of a column with any of the others. Not true. Each piece of the Parthenon is unique and fits together like the world's biggest and heaviest jigsaw puzzle. Lines that look straight are actually not. The ancient Greeks understood the mechanics of site and that to make a line look straight it had to be tapered or curved. The Parthenon is the most perfect and the most imitated building in the world. The restoration work you see has been going on for the last 30 years and may go on for another 30. The more they try to put it back together the more respect and awe they have for the ancient Greeks.

The Erecthion sits on the most sacred site of the Acropolis where Poseidon and Athena had their contest over who would be the Patron of the city. Poseidon thrust his trident into the rock and a spring burst forth, while Athena touched the ground with a spear and an olive tree grew. Athena was declared the victor and the great city of Athens was named for her while Poseidon was given a small village in Syros after it was discovered he had merely ruptured a water main. (not really. The building itself contains the porch of the maidens or Caryatids which are now copies, four of which have been placed in the Acropolis museum, hopefully to be reunited with a fifth taken from the Acropolis by Lord Elgin and put in the British Museum more than a century ago. Actually it is the Erecthion that is the real religious temple on the Acropolis. It sits in what was the northeast corner of what was the original temple, that was burned and destroyed by the Persians in 480 bc. The Parthenon, though we call it a temple, was not a place of worship. It was a built as a tribute commemorating the Greek victories over the Persians and it was used as a treasury to store the tribute paid by the other Greek city-states. So in other words the Parthenon was not considered holy. But the Erecthion was.